I saw Joss Whedon’s new film of “Much Ado About Nothing” yesterday. It’s more good than bad. I got the greatest enjoyment out of listening to the teens behind me gasp and giggle at the things they didn’t know were coming. You know you’re doing something right when there’s a huge reaction to “Kill Claudio.”

The film is set at an idyllic California mansion (Joss Whedon’s, actually) very much in the present day. Which led me to ponder again – what’s great about Shakespeare set in the here and now? What doesn’t work at all? Do you have to update the language or not? (Whedon’s film doesn’t  – other than a few pronouns for male characters switched to female – and yes, it’s slightly jarring to hear “Italy” constantly mentioned, and references to doublets and armor seem momentarily out of place, but we get over it.) And most importantly – have human beings changed significantly in the last 400 years? Are we incapable of appreciating the same things as the Early Modern audience, we with our short attention spans and our visually fixated culture, or can we still be tempted to turn off our devices and simply listen? Do the same things delight us? Do the same things frighten us?

At our annual gala on May 1, I was introduced to a tall man, a stranger to me, as the new Artistic Director. “A-ha!” he said. “I have a bone to pick with you.” This gentleman’s complaint was that we have not, in the last 12 years or so, set any Free Shakespeare in the Park production in the original Elizabethan or Jacobean period. This is true. Our Resident Director, Kenneth Kelleher, tends to update things. He believes that modern audiences need more visual cues, more connections to our own time and place. He references the status indicators of the period – military uniforms and crowns on the men and skirts on the women – but hangs out primarily in the 20th century. Also, as I explained to my new friend at the gala, Elizabethan costumes are prohibitively expensive. All those slashed sleeves, codpieces, and puffy pants will cost you – check out the museum at Shakespeare’s Globe in London, with its high price tags for costumes made using original practices. Today’s Shakespeare companies have good reason to update.

Our upcoming production of “Macbeth” is set in a non-specific modern period. You won’t see any kilts, and references to Scotland and specific thanes will be downplayed. These choices are small and subtle. Where we’ve made bigger changes is in the world of the Witches.

In King James’ England, witches were a very real concern. The King himself published a popular book called “Daemonologie” instructing good Christian citizens how to spot the work of the Devil:

The fearefull aboundinge at this time in this countrie, of these detestable slaues of the Deuill, the Witches or enchaunters, hath moved me (beloued reader) to dispatch in post, this following treatise of mine, not in any wise (as I protest) to serue for a shew of my learning & ingine, but onely (mooued of conscience) to preasse thereby, so farre as I can, to resolue the doubting harts of many; both that such assaultes of Sathan are most certainly practized, & that the instrumentes thereof, merits most severly to be punished.

Witches were not cute children in pointy hats, or heroic figures like Hermione Granger or Professor McGonagall (though surely it can’t be a coincidence that she’s Scottish.) They were deformed, half-human creatures, Faustian beings who had given up their souls in exchange for great powers. Fear of them kept people awake at night. 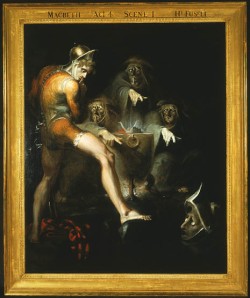 Do any of us lie awake at night for fear of witches? It’s unlikely. Vampires, werewolves, and zombies have all been recently revived in the popular culture, and can still inspire fear. But witches have been rendered benign (Bellatrix Lestrange notwithstanding), and not just by J.K. Rowling. “Bewitched”, “Sabrina the Teenage Witch”, “Buffy the Vampire Slayer” and “Charmed” all featured cute, sexy, lovable witches. I can’t think of the last time a wizened, ancient, warty witch made a frightening appearance in popular culture – probably Disney’s Tangled, but even she had a sultry alter ego.

“Macbeth” should be a scary play – chilling, thrilling, huddle-close-to-your-neighbor-on-the-picnic-blanket scary. If the Witches aren’t scary, we’ve got a problem. Ken knew this from the outset, and came up with a solution. If you look back at film, books, TV over the last half-century – what do we modern-day humans find scary?

Think about it. From “Children of the Damned” to “The Omen”, “The Shining”, “The Exorcist”, and even the recent “American Horror Story”, creepy kids terrify us.  I’m not a psychologist, but there’s something about creatures that ought to be innocent and harmless turning on us that freaks people out. For some reason, it’s easier for modern audiences to believe that the Devil could lurk in an innocent child than in an ancient old hag.

So – Ken suggested a trio of very weird little girls as our witches, or Wayward Sisters. I was delighted – it makes sense, it will be scary, and besides, what an opportunity for some of our up-and-coming young actors! We’ve cast a terrific group – Rainier Pearl-Styles and Sarah Young of San Francisco and Rasika Raghavan of San Jose. Yes, they look innocent now…

As for the text, we’ve trimmed the witch scenes significantly. Arguably, when King James first saw the play in 1606, much of the witches’ language wasn’t part of the production. It’s likely that Act 3, scene 5 and parts of Act 4, scene 1 were written by Thomas Middleton, a younger playwright. Several songs in the Folio text of “Macbeth” (1623) are pulled directly from his play “The Witch”. Since these songs didn’t exist yet when Shakespeare wrote the play and were probably added after his death, most directors cut them, along with the Hecate scene of 3.5. Middleton’s witches seem more modern – rather adorable and fun, like the Fairies of “A Midsummer Night’s Dream.”

“Double, double, toil and trouble” (4.1) is probably Shakespeare’s own creation – in our production, we’ve turned it into a creepy nursery rhyme instead of a cauldron spell. You can learn it with us at this year’s Green Show, presented about 30 minutes before show time. It’s called “Witchipedia,” and yes, it features playful, funny witches, more in the Middleton or Rowling vein.

I’d love to hear your thoughts – what is scary to you? What delights or annoys you about modern versions of Shakespeare? You can write your comments here or just say hello in the park in a few weeks – we can’t wait to see you there!