Do you remember summer sleep-away camp? That bubble of time that seemed to both last forever and be over much too fast, that indescribable mix of sensory experiences – the dirt under your fingernails, the smell of campfires in your hair, the taste of mess hall pancakes, the squishy squeak as each kid in your cabin turned over in their sleeping bag. The friends you made – how you talked about everything, spilled your deepest secrets, told your best lies. The last day, when the new friends tied bracelets around your wrists, hugged you and promised to write. Then your parents picked you up and drove you by the mall on the way home, where the back-to-school displays were up in every store, and you knew that that magical time was over, done, filed under memory.

Since Tuesday, I’ve been staying in Pleasanton, preparing for Macbeth to open this Saturday. This is the first time in my 12 seasons with the Festival that I have stayed on site, and as I joked with my interns the other day, it feels a lot like Shakespeare sleep-away camp. As we mop the stage after unexpected morning rain showers, nap in the shade in the afternoon, or beat off the June-bugs that dive-bomb our heads at night, we’re forming friendships, arguing about politics, learning who we are. We’re all very different, but it doesn’t matter, because we all love Shakespeare.

Summer and Shakespeare have always been intertwined. In Queen Elizabeth’s time, all theatres were open to the sky, so the start of the theatre season came with that other blessed and magical time in England, spring – when the grey fog of February and March began to lift occasionally, and daffodils began to push through the frozen earth.  It’s hard for us in Northern California to understand that shift in the very quality of the air, which brings with it a vague anticipation, an intangible longing.

I am addicted to that feeling, and that’s why I do theatre.  Like summer, a play exists for only a brief moment. It is born in anticipation and ends with nostalgic longing for what is gone. The friendships made over the course of one production can last a lifetime, or they can dissolve into air, into thin air. 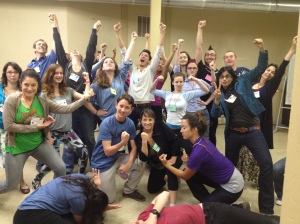 No pictures or video can ever really capture the feeling of live performance, though they may serve as triggers for memories. As Clayton Lord argues in Theatre Bay Area’s outstanding book Counting New Beans, memories are the always elusive, eternally thrilling reason that audiences attend the theatre:

“What we traffic in is memories. Theatre, particularly, but all the arts, are representations of abstracted or concrete parts of this world, pushed out from artists to audience with the goal of sticking in the head. We are memory makers.”

Lord goes on to say that memories are more vivid, more “sticky,” when the arts experience is preceded by some kind of pre- or post-performance engagement. Those of us who make the art know this is true – we have lived and breathed the show 24-7 for what we call “tech week.” Everything else falls away, and this play, these people are our only world. Our memories of the experience are stronger, our connection to the arts organization much more powerful. 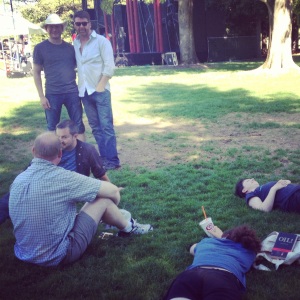 We want you, our audiences, to experience theatre in the way that we do – as something anticipated with joy, completely immersive in the moment that it exists, and remembered with longing. Counting New Beans cites Alan Brown’s report to the Irvine Foundation:

“From the resurgence of knitting circles to the growing legions of rusty musicians and aspiring storytellers, Americans are activating their own creativity in new and unusual ways. This phenomenon is not limited to culture, but part of a larger ‘participation economy’ in which social connection eclipses consumption. Increasingly, Americans want to meet the people who make our products, share in the work of the makers and make things ourselves.” 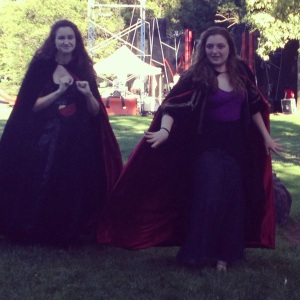 At SF Shakes, we want to engage deeply with you, making your experience with us personal and memorable. At Free Shakespeare in the Park this year, our intern company performs a Green Show called “Witchipedia” half an hour before show time. This 15-minute comedy presents historical and social context for the play in a fun, kid-friendly, audience-interactive way. For years, our Shakespeare Campers have had the opportunity to perform the same play that we present for Free Shakes, allowing them to develop deep connections to the story and characters. This year, we will experiment with post-performance “pub chats,” either in a local restaurant close to the park venue or virtually, over Twitter. Finally, our new Shakespeare For All program, directed by Education Program Manager Steve Muterspaugh (who also plays Banquo in Macbeth) makes creating a Shakespeare production a collaborative community experience, in which first-time actors appear on stage with SF Shakes professionals. 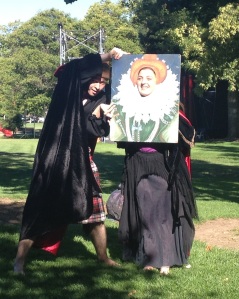 For some people, summer means a favorite campsite, a vacation cabin in Tahoe, a trip abroad. For me, and for my friends and colleagues here at SF Shakes, summer means the smell of cut grass in Amador Valley Community Park, meal break runs to Safeway and Starbucks up the street, a mix of sunscreen and bug repellent on the skin, car trunks full of picnic blankets, sunhats, scarves and mittens, late nights coiling heavy cables, the smell of gas from the generators, gallons of fake blood, very real sweat, and occasional tears. Sure, we could be doing indoor theatre, somewhere with a roof protecting us from sun, wind, and rain, but that wouldn’t feel like summer. It wouldn’t really feel like Shakespeare. In the park, we can imagine what it was like to be those other Players, 400 years ago – June-bugs probably dive-bombed their heads as well.

We hope that for you, too, summer means packing a delicious picnic, finding the low-backed beach chairs that didn’t break last summer, digging out the sunscreen and the wide-brimmed hats, packing the warm blankets and layers for when the temperature drops, and coming out to the park to take part in the magical, fleeting thing that is live theatre. As the sun sets over the stage and the incredible language of Macbeth lures you into its thrall, put away your phones, your cameras, those futile attempts to make permanent something that was meant to disappear. You’re part of something transitory and elusive, something that exists only for that moment, something that we hope will become a cherished memory. Perhaps you’ll recall the words of Puck at the end of A Midsummer Night’s Dream:

“If we shadows have offended,
Think but this, and all is mended,
That you have but slumber’d here
While these visions did appear.
And this weak and idle theme,
No more yielding but a dream.”