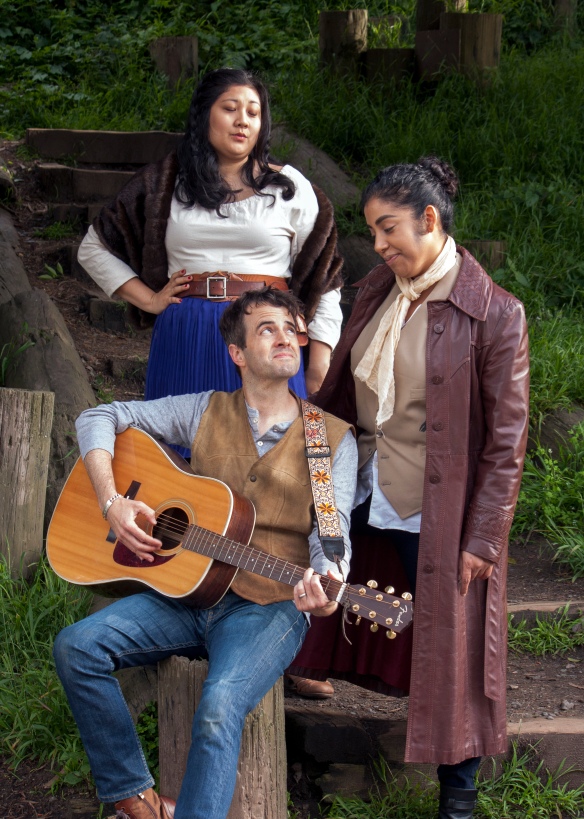 In the Court of a near-future city, we meet Orlando, busking on the street. He is accompanied by Adam, a servant from the house of Orlando’s late father, Sir Rowland de Boys. Enter Oliver, brother to Orlando, a ruthless politician returning from a business trip. He is embarrassed by his brother’s performance and the two argue. Orlando accuses his brother of treating him badly and demands his share of the family inheritance. They brawl briefly. Orlando proves the better fighter, but he backs off and leaves the scene with Adam. Oliver then conspires with Duke Frederick’s champion wrestler, Charles the Lioness, to kill Orlando when they next meet in the ring

Elsewhere in the Court, we meet best friends and cousins, Celia and Rosalind. Celia is the daughter of Duke Frederick, who came to power by stealing the throne from his older brother, Duke Senior, Rosalind’s father. Celia attempts to comfort a distraught Rosalind when the Court’s social secretary, Le Beau, enters to invite them to watch the fight between Charles and Orlando. Wrestling is the favorite form of entertainment in the bloodthirsty Court. This is when Rosalind first meets Orlando, whom she falls for instantly. To everyone’s surprise, Orlando wins the match, which doesn’t please the Duke. Rosalind gives Orlando a token to wear.

After the match, Rosalind is banished by Duke Fredrick who considers her a political threat. Celia bravely decides to join her. They devise a plan that will allow them to move safely unnoticed: Celia disguises herself as a poor woman, Aliena, and Rosalind as a young man named Ganymede. Together they flee to the Forest of Arden where they settle into their new identities and

Back at the Court, Adam warns Orlando to flee his brother’s murderous treachery. So, coincidentally, they also enter the Forest of Arden and the safety to be found there. In another coincidence, Rosalind’s exiled father lives in the forest as well. We meet him and his community of native Foresters and Court Exiles weathering their first winter in the wilderness. Among the Exiles is Jaques, a melancholy member of the Duke’s cohort known for witty observations and sporadic behavior. Orlando, searching for food for the weakening Adam, stumbles into the Duke’s forest camp. After a rocky introduction, the Duke welcomes Orlando and is happy to learn that he is the son of his dear friend, Sir Rowland de Boys. Alas, by the end of their introduction, the elderly Adam passes away peacefully.

Back at the Court, Duke Frederick and Charles torture Oliver and send him to retrieve Orlando.

Months pass and spring comes to the forest; and everyone’s thoughts turn to love. Rosalind finds love poems hanging from the trees. The poems are poorly written and she and Touchstone poke fun at them until Celia reveals their author to be none other than Orlando, who is sick in love. Shaken, Rosalind wonders what to do about her disguise. Finally, Rosalind-as-Ganymede meets Orlando. She tells him she can cure his lovesickness if he comes to her house daily, pretends to woo her, and calls her Rosalind. He agrees to this plan. Meanwhile, other seemingly hopeless romances develop around them. Silvius continues to try and fail to woo Phebe. Phebe, for her part, falls for Ganymede after being insulted by him. Touchstone challenges a rival suitor, William, to win the affections of Audrey, a resourceful local woman.

Oliver arrives in the forest a changed man. He reports that Orlando was attacked by Charles the Lioness in the woods while trying to protect a stranger who happens to have been Oliver himself. The news causes Rosalind-as-Ganymede to faint. Oliver and Celia waste no time falling in love and getting engaged. To great relief, Orlando arrives with only a small wound on his arm and gives Oliver consent to marry Celia, but is sad that he can’t marry Rosalind. Ganymede enters and claims to be able to summon Rosalind through magic, telling Phebe, Silvius, and Orlando to come together the next day so he can set everything right with a wedding. The next day, Ganymede appears, bringing the brides with him. He says Rosalind will appear if Duke Senior (her father) blesses their wedding and if Phebe will marry Silvius. They agree and Rosalind drops her disguise to become Rosalind again. Jaques officiates the weddings of Audrey and Touchstone, Celia and Oliver, Silvius and Phebe, and Rosalind and Orlando

A messenger arrives to announce that Duke Frederick, who was coming with an army, met a religious man on the road and was converted from his evil ways. Reinstated, Duke Senior and the Exiles can return to Court. Jaques, curious about religious life, decides to stay in the woods with Duke Frederick.