A tradition of the San Francisco Shakespeare Festival is the Green Show. 30 minutes before every Free Shakespeare in the Park production, the intern company performs an original 15-minute educational play which outlines the history of the show and provides a quick synopsis of the story. 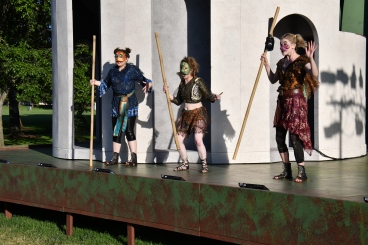 Interestingly, the Green Show echoes the prologues that were seen in some of Shakespeare’s plays. One of his most famous prologues appears in Romeo and Juliet. A prologue actually appears in the play A Midsummer Night’s Dream as well. When the mechanicals perform Pyramus and Thisbe at the Duke Theseus’ wedding, Peter Quince steps forward to give a prologue. His prologue has 2 functions. First, he makes an appeal for the audience’s sympathy; he asks the audience to forgive them if they are offensive. Second, Quince provides a summary of the plot.

The presence of a prologue was fairly common in Elizabethan theatre. They usually served, as in the case of Quince’s prologue, to ask pardon from the audience members, provide themes for the play, and give historical context. Prologues were typically performed by a single actor dressed in black, providing a stark contrast to the other, more elaborately dressed, actors.

The Green Show was started at the San Francisco Shakespeare Festival in 2012 as a casual synopsis game organized by the Front of House interns. The following year, the “synopsis game” was formalized into a script. However, it was not until last summer (2017) that the Green Show was performed on stage. Moving the performance to the stage allowed the audience to find it more easily.

Our 2018 Green Show, titled “Flower Rangers,” is directed by Amelia Adams. The script was created by a collaborative process between Adams, Rebecca J. Ennals, and the entire cast. It features three fairies — Mulberry, Dewdrop, and Thorn — as they recount the events of A Midsummer Night’s Dream. These three fairies actually show up in the main show as part of Oberon’s fairy team! Below are some of the thoughts and experiences of the “Flower Rangers” team.

In your words, what is the Green Show? 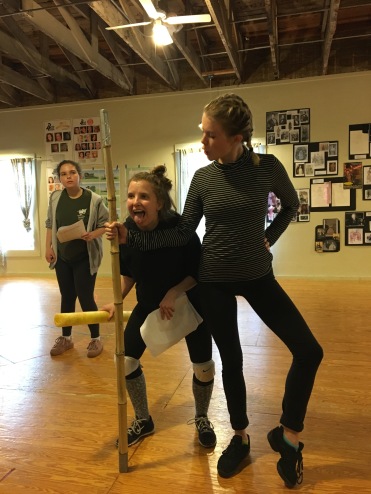 Abigail Milnor-Sweetser (Thorn): The Green Show is a silly, fun, entertaining pre-show skit that gives an overview of the A Midsummer Night’s Dream for the younger members to the audience. It also covers historical aspects of Shakespeare’s time and life, as well as various different takes on productions of it throughout history. It involves audience participation, and even features a dumb show. Fun for the whole family

Olive Fox (Stage Manager): I think that the Green Show is a way to introduce the audience who probably isn’t familiar with the show to the story and some of the bottom line messages. It’s important because it allows people to become engaged with the main show now that there is familiarity with the story. The metaphorical ice is broken and so the story becomes less foreign and you can then really enjoy the acting and Shakespeare’s words.

Why do you think the Green Show is important to our particular production?

Caitlin McNeilage (Swing): I think the Green Show is important because it really sets up the world of Midsummer and shows audiences right away that we’re in a magical realm where fairies roam and anything is possible. I also think it makes Shakespeare even more approachable and helps everyone follow the show better when they watch Midsummer. Plus, it’s just really fun!

Gina White (Dewdrop): The plot of Midsummer is confusing, especially with the lovers, and by showing the audience what happens first, they can hopefully understand it more. This show also has some audience interaction, so the Green Show is a bit of a warm-up for the audience to understand that they won’t just sit there and watch it, but that they will participate in the show.

What do you hope audience members will take away from the Green Show? 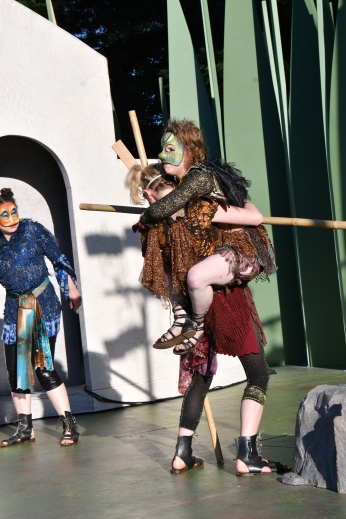 Colleen Scallen (Mulberry): I hope they take away a base sense of the plot of Midsummer and a general familiarity with the characters so that they can really enjoy the magic of our production without getting lost by the plot (if they’re not familiar with it previously). I also hope they feel welcomed to the space and consider the Green Show a “come on in!” to celebrating the beauty of theatre with us during Midsummer.

Caitlin McNeilage (Swing): I hope audiences feel that they’ve been prepared to watch Midsummer after watching the Green Show and that they have enjoyed themselves and feel that they’ve gotten in touch with their inner fairy.

Abigail Milnor-Sweetser (Thorn): I would like the audience to, more than anything, enjoy the silliness of the characters of the fairies and their presentation of the play’s history and synopsis. Indeed, since then main show itself may be difficult for some viewers to follow, given Shakespeare’s superb poetry, I hope that those individuals will feel that they were able to experience a little play that is intended to serve their needs and attention. And, I hope that it will give them a bit of ‘a leg up’ when it comes to entering the actual world of Athens and the Forest once the main show begins.