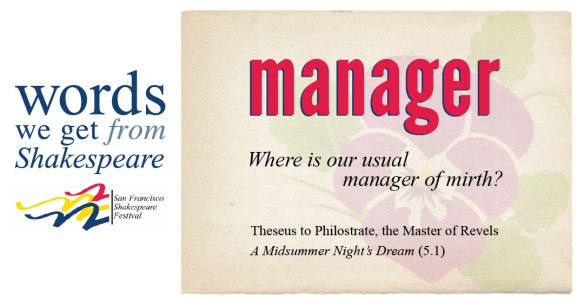 A tradition of the San Francisco Shakespeare Festival is the Green Show. 30 minutes before every Free Shakespeare in the Park production, the intern company performs an original 15-minute educational play which outlines the history of the show and provides a quick synopsis of the story.

Interestingly, the Green Show echoes the prologues that were seen in some of Shakespeare’s plays. One of his most famous prologues appears in Romeo and Juliet. A prologue actually appears in the play A Midsummer Night’s Dream as well. When the mechanicals perform Pyramus and Thisbe at the Duke Theseus’ wedding, Peter Quince steps forward to give a prologue. His prologue has 2 functions. First, he makes an appeal for the audience’s sympathy; he asks the audience to forgive them if they are offensive. Second, Quince provides a summary of the plot.

The presence of a prologue was fairly common in Elizabethan theatre. They usually served, as in the case of Quince’s prologue, to ask pardon from the audience members, provide themes for the play, and give historical context. Prologues were typically performed by a single actor dressed in black, providing a stark contrast to the other, more elaborately dressed, actors. END_OF_DOCUMENT_TOKEN_TO_BE_REPLACED

Shakespeare gets credit for being the first to use gossip as both a verb (in Comedy of Errors and All’s Well That Ends Well) and a noun. 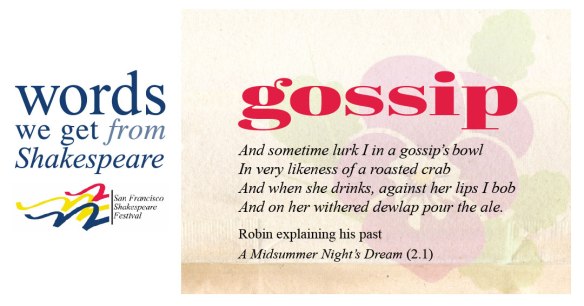 Our first Thursday show is this Thursday, July 26 at 7pm at the Memorial Park Amphitheater in Cupertino!

Recently, the Folger Shakespeare Library published a blog post titled “Six things to look for when you watch ‘A Midsummer Night’s Dream’.” For the blog post, I submitted a paragraph of my own thoughts on one aspect of the play that I think is important to look out for. Below is an expanded and more in-depth version of that paragraph. The full blog post is linked at the bottom.

I have always been fascinated by the connection between Helena and Hermia. In a play about love and relationships, I think that the friendship and sisterhood between Hermia and Helena is often overlooked. Textually, their relationship quickly evolves from that of two close childhood friends to bitter enemies. How the actors and the director chose to portray this relationship and rationalize why it so quickly falls apart can be incredibly exciting and interesting. END_OF_DOCUMENT_TOKEN_TO_BE_REPLACED 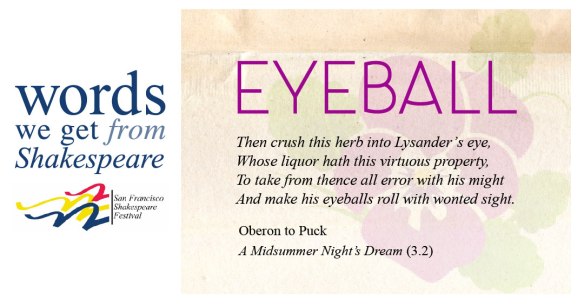 1. The start of the process

The decision to stage A Midsummer Night’s Dream was made in September, 2017, nearly a year before the first performance. San Francisco Shakespeare’s artistic director and the director for this play, Rebecca J. Ennals, wanted to create a production that was accessible for people from all ages and all levels of Shakespeare experience:

Embracing the magic and the fairy world of the show was also important for her. This magical world tends to attract children, creating a more family-friendly show.

“What are the fairies and what is their magic? How are they all around us? One of my favorite moments in the production is when the lovers are fighting and then these little fairies are hanging out watching them and there’s a lot of them, not just Puck and Oberon, but there’s a bunch of other fairies watching too and it’s just the idea that these little invisible beings might be places and as a kid I loved that idea.”

After the decision was made, the next step was to find designers and to cast actors.

What would a show be without the magnificent set, costumes, sound, lights, props, and masks brought to us by our designers? Our production of A Midsummer Night’s Dream features a spinning set, nearly 20 different masks, elaborate costumes, original music, and dazzling lights.

In our show, every single fairy and Bottom, when he turns into a donkey, wears a mask designed and created by Kendra Johnson. Some of these masks were created using molds in order to ensure a better fit. Below are the creation processes for two of the masks in the production.

The mask design process for the character Robin Goodfellow, the Puck, played by James Lewis. Photos courtesy of Kendra Johnson and Jay Yamada.

Costumes are also important in forming a character. These are four of the many costumes you can see in our show. All of them are designed by Hyun Sook Kim.

The rehearsal process for this production of A Midsummer Night’s Dream lasted approximately 4 weeks. During that time our actors read and worked through Shakespeare’s language, staged their movements, learned the music, practice fight choreography and more. It is during this time that an actor is able to shape their character and better understand how their character operates in the world of the play. The following are a few quotes from our actors on what it’s been like to work on the show:

Amelia Adams (our mask and movement specialist) and Abigail Milnor-Sweetser (who plays Thorn, a fairy) practice an acrobatic lift.

Sean Garahan (Francis Flute and Mustardseed): I think the biggest challenge for me has been the physicality of the fairies, the world that the fairies live in and making specific choices, choices that I can replicate every show.

Colleen Scallen (Attendant and Mulberry): I love how malleable and open to interpretation it is and I just love the magic and the mystique of it and I think those feed off of each other. What is magic? Magic is something that you can find in anything.

Ed Berkeley (Demetrius): The biggest challenge. There’s a lot of blocking. It’s not necessarily strictly choreographed but there’s so much going on and so much movement so adjusting to everything and remembering everything and going with the momentum. Once the play starts going it’s just fast paced.

After months of planning, building, creating, and rehearsing, it’s time to put it all together. During this week, we finally head out to the park where Neal Ormond, our set designer, has assembled the stage. At the park, we’re able to add in the lighting design, work with the microphones, speakers, and recorded sound, rehearse in full costume, and finally perform on the set.

Colleen Scallen, Mulberry the fairy, tests out the mushroom platforms on the set. Costumes by Hyun Sook Kim. Masks my Kendra Johnson. Set by Neal Ormond. Lights by John Bernard.

James Lewis (Robin Goodfellow, the Puck) explores all the different entrances available on the set

Demetrius (played by Ed Berkeley) and Hermia (played by Patricia Austin) resolve their differences in their attempts to stay warm backstage!

Finally, the show is ready to be shared with our audience! Here is some advice from our director, Rebecca Ennals on how to watch the production:

“I would say be childlike in your approach to this production. Just keep this wonderful open mind and relax. If you don’t understand a word, it’s fine. Shakespeare’s audience didn’t understand everything either; he was coining so many words and phrases and making new stuff up all the time so they were just living in a time in a culture where newness, renaissance was going on all the time and so I think they had a different take on the world around things like language and art.” 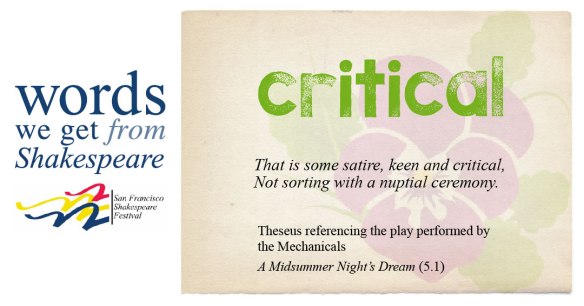 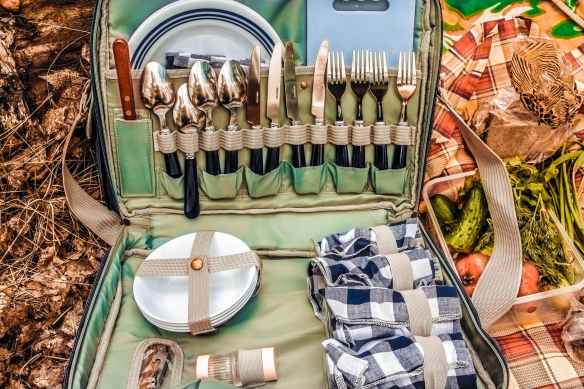 Photo by Pixabay on Pexels.com

See this? You do not have to be this fancy when you bring food to the park for a show.

Since this is our 36th year of existence, we know a thing or two about picnic food. In some of our venues, we do evening shows; in other venues, we do afternoon matinees. That means we’ve seen the best of lunch and dinner (in venues both hot and chilly!). This year, we really want to know what you bring to the park so please share it with us by taking a picture and using the #SFShakesDream hashtag!

Over the summer, we’re certain that our audiences will offer you plenty of inspiration for what to bring to munch on. And here are a few inspirations of our own:

This Buzzfeed article lists 23 great picnic foods that are fairly easy but look pretty fancy to us. If you’ve got the time, Saveur offers these picnic foods which may require a few extra steps for prep. But who are we kidding? Some of us will just make a mad dash through the nearest grocery store on our way to the park. In that case, the kind folks at Epicurious have these wonderful suggestions on just what to grab.

Of course, it can all depend on the size of your group and who is in it. For that reason, Parent Map offers Picnics 101 on cheap and easy family outings. (It’s terrific. Even a card-carrying grownup can benefit.) And this blog for families also has great tips, particularly if you’re heading to the park early that day.

For big groups, and if you like to like to cook to impress, take a gander at these 27 ideas on this blog or these 30 ideas from the good people at Midwest Living (no cooking required!). And here’s some great stuff that is NOT sandwiches!

Whether you’re a pro at this or a first timer, here are some quick reminders about enjoying a picnic in the park: 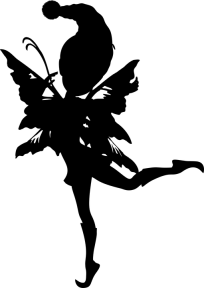 The language Shakespeare used is complex and can be unfamiliar to modern audiences.

Take, for example, these first lines of the character, Hippolyta:

“Four days will quickly steep themselves in night;

Four nights will quickly dream away the time;

And then the moon, like to a silver bow

New-bent in heaven, shall behold the night

Those five lines are just a very descriptive way of saying “Four days will go by quickly and then we’ll get married at night!” Although very different from the way we speak today, the language used is also an integral part of the beauty of Shakespeare’s plays. END_OF_DOCUMENT_TOKEN_TO_BE_REPLACED