A Midsummer Night’s Dream was written by William Shakespeare sometime in the years between 1594-1596. It is considered one of Shakespeare’s comedies and is one of his most widely performed plays. The story has been adapted to many mediums including classical music, ballet, literature, and film.

What is A Midsummer Night’s Dream about?

The play begins in the city of Athens…

Theseus, the Duke of Athens and Hippolyta, Queen of the Amazons, are about to be married. Egeus and his daughter, Hermia, enter the court with her two suitors, Lysander and Demetrius. Lysander and Hermia are in love, and therefore hope to marry. However, Egeus wants Hermia to marry Demetrius instead. Theseus tells Hermia she must obey her father or become a nun. Upset by the decision, Hermia and Lysander make plans to run away. These plans are shared with Hermia’s best friend Helena. However, Helena is in love with Demetrius and tells him the plans in hopes of gaining his favor and affection.

Later, the setting of the play shifts to the woods just outside of Athens…

The king and queen of the fairies, Oberon and Titania, are quarreling. Oberon wants the changeling child that Titania adopted yet she refuses to give the child up. Oberon sends one of his fairies to find a magic flower. He then uses the magic flower to make a love potion which he applies to the sleeping Titania’s eyes, making her fall in love with the next person she sees.

Meanwhile the mechanicals are rehearsing their play in the woods. Robin, a mischievous fairy called a puck, decides to play a trick and give Bottom a donkey head. Bottom’s companions run away in fright and he stumbles into the clearing where Titania is sleeping. Titania wakes and consequently falls in love with Bottom. While Titania is fawning over Bottom, Oberon manages to convince her to give him the changeling child.

Oberon creates an antidote to the love potion. He applies it to Titania’s eyes and Lysander’s eyes. Robin removes the donkey head from Robin and order is restored.

In the morning, Theseus, Hippolyta, and Egeus come across the sleeping lovers. Theseus overrides Egeus’ original wish and decides that Lysander and Hermia can get married. They all head back to Athens for the wedding and the performance by the mechanicals. 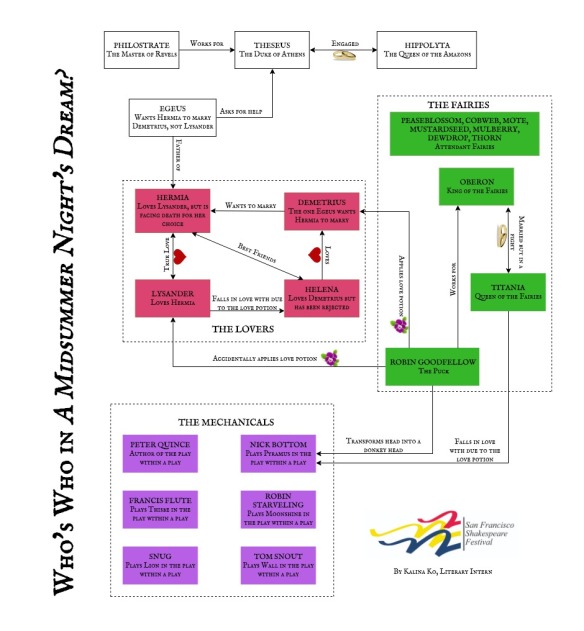 Below are a few famous quotes, can you guess who said each one? (Answers at the bottom of the post)

Answers to the Famous Quotes: