Carl Holvick and Lauren Spencer* perform the balcony scene from “Romeo and Juliet” at Yerba Buena Gardens for Speech #3, February 14.

All the World’s a Stage…including San Francisco!

In 2017, we celebrate 35 years of performing Shakespeare in San Francisco. With your help, we’ll keep honoring our favorite playwright, our home city, and the 35th Anniversary of the Festival by presenting 35 of Shakespeare’s most famous speeches and scenes, in 35 iconic San Francisco locations, pop-up style.

Festival Resident Artists, led by Artistic Director Rebecca J. Ennals, are presenting roughly 5 “mini-performances” each month, each lasting 5-10 minutes, from February through August 2017. Each month’s set of speeches is anchored by a famous speech from Hamlet, our 2017 Free Shakespeare in the Park production.

Will Shattuc and David Moore* perform “Now is the winter of our discontent…” from “Richard III” near the Yoda Fountain in the Presidio as Speech #11, May 4.

This project is boosting the Festival’s visibility in the community at a time when we are normally out of the public eye, while also bringing attention to the 35th Anniversary and to our expanding artistic offerings (and newly established cadre of Resident Artists)…all in the lead-up to our annual summer Free Shakespeare in the Park production.

We also see this project as an opportunity to extend a core tenant of our mission: to make the works of Shakespeare accessible to all. By taking the Bard’s words into the neighborhoods of San Francisco, including famous places that are not necessarily tourist destinations but rather beloved local attractions, we want to engage directly with our community and break down barriers to cultural access such as price (performances will be free) and place (we meet the community where they live). 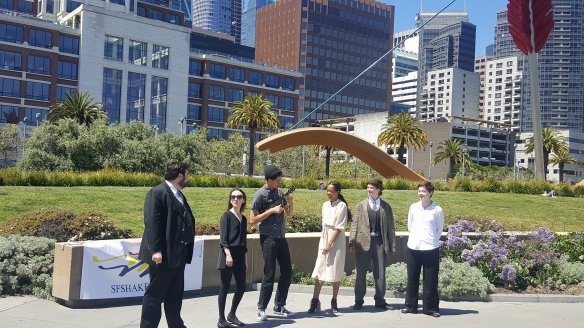 The cast of our Shakespeare on Tour “Twelfth Night” perform “If music be the food of love…” and “Make me a willow cabin at your gate” as Speeches #9 and #10 in Rincon Park, May 1.

WANT TO SPONSOR THIS PROJECT?

You can sponsor part of a speech, a full speech, multiple speeches, or a whole month of performances as part of our 35th Anniversary Campaign!

We encourage producers at any level to publicize their chosen event using photos, video, and social media, to pass out programs at the performance, and to help determine venues and speeches (depending on support level). 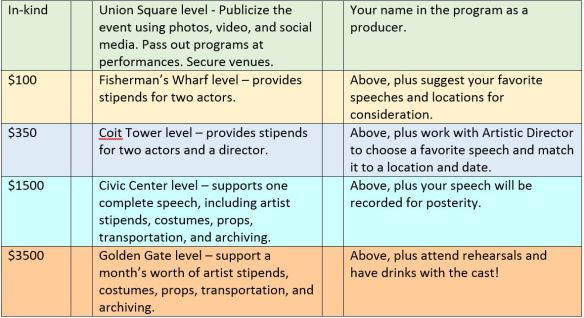 If you care to join our efforts, it’s easy to make a contribution to our 35th Anniversary Campaign. Help us take pop-up theatre across San Francisco! And be sure to keep an eye on our Facebook page and website to find out where “35 Speeches” will be heading next… 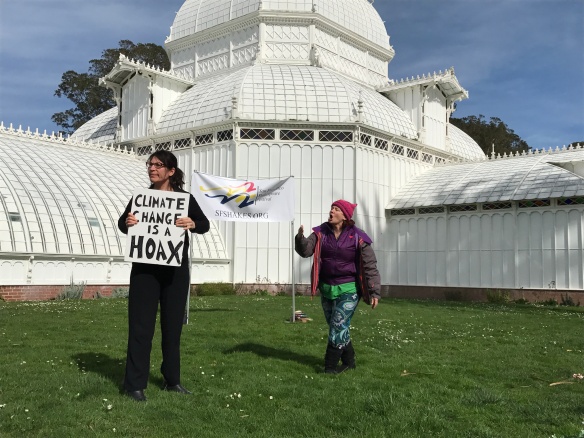 Sarah Shoshana David* and Julia Rechter perform “These are the forgeries of jealousy…” from “A Midsummer Night’s Dream” at the Conservatory of Flowers for Speech #2, February 12.