Cynthia Francis loves our Bay Area Shakespeare Camps. In fact, she loves them so much that she joined our Board of Directors to help them keep reaching more children every summer! A mother of three daughters (twins, now 22 years old, and a younger daughter, age 19), Cynthia sent all three to our camps as they were growing up. We asked her to reflect on the ways that SF Shakes summer camps have impacted her family.

What drew you to our camps in particular?

I had watched Free Shakespeare in the Park off and on for years, so SF Shakes was already on my radar. I didn’t discover the camps until my youngest daughter became really interested in theatre and musicals, when she was 6 or 7.

She attended camp the first summer, and then raved about it so much that all three of my daughters went to at least one session every summer after that. When you’re raising three kids in San Francisco, and it’s summer but both parents are working, it’s a miracle to find something that’s interesting and stimulating for all of them but is also affordable!

As a parent, what do you think makes Bay Area Shakespeare Camps special?

One of the things I love about the Shakespeare camps is that there’s a place for everybody. Two of my daughters have always been really into acting, but there was also a place for my kid who didn’t really want to be visible on stage. She loved being involved with all aspects of camp (swordplay, making costumes, all of that), but she wasn’t interested in playing Juliet. She wanted about three lines (which she always delivered beautifully)! She was more introverted, very into math and science, but she loved the structure and precision of Shakespeare’s language. She was welcomed at this camp about performing Shakespeare, and she had a wonderful time each summer. The camp isn’t geared just to just one kind of kid, to young actors, the way some theatre camps are. SF Shakes gives kids exposure to theatre and theatre tech, and allows children to find themselves through new interests in topics they might know nothing about.

How did the camp experience impact your children?

My youngest, who started our family’s relationship with camp, is still a self-proclaimed Shakespeare nerd. She went all the way through SF Shakes camps, from Shakespeare Players through Advanced Shakespeare Workshop in high school. Then she became a summer intern for SF Shakes, working front of house and understudying the Witches in the Free Shakespeare in the Park Macbeth, and was in SF Shakes’ first Green Show production. Then the next year she became an acting intern and performed all summer in the SF Shakes Taming of the Shrew. Things have really come full circle now, because she’s taught SF Shakes camps, first as intern and now as a paid teacher. She’s graduating from the Pacific Conservatory for Performing Arts and is now auditioning for Shakespeare repertory companies all over the country.

Her introverted older sister went on do speech and debate in high school, and we credit Shakespeare camps with so much about her understanding and love of language. She kept going to camp until she was in high school. She went on to study at California Polytechnic State University–she’s not an actress but she definitely appreciates theatre and the arts. Her more outgoing twin enjoyed performing Shakespeare (made it to second place in the ESU Shakespeare Competition, and became an SF Shakes Intern), but she also loves modern theatre and film. She got her degree in acting from the UCLA theatre and film school.

That’s what I mean about camps welcoming everybody. Performing Shakespeare was always my youngest daughter’s thing, and that’s great. But it’s equally great that my introverted daughter developed this love of language and then went on to study science…that’s amazing to me!

What surprised you most about camps?

There were plenty of kids, friends of the family, whom I “corralled” into going to this camp, and none of them were scared of Shakespeare the way that adults can be. As a parent, sometimes we can have our biases blind us. I think it’s easy as an adult to hear Shakespeare’s name, and remember sitting in your high school English class studying language that you maybe didn’t understand. Maybe in high school you were introduced to Shakespeare by a teacher who brought it to life, but many adults I talk to…their eyes glaze over and they say, “that was almost as hard as Moby Dick.” But kids aren’t scared of it yet – in fact, it becomes a source of confidence and power for them, learning to understand and love something that many adults find intimidating!

Why would you recommend Bay Area Shakespeare Camps to other parents?

When my girls were growing up, I encouraged them to play soccer, even though I was pretty sure they weren’t dreaming of being professional athletes. It was a good experience, they learned a sport, and they made some friends. When I tell people about SF Shakes camps I often hear, “Well, my child’s not an actor.” But with Shakespeare, you never know what they’ll learn or get out of the experience. Give it a chance.

How did your daughters’ camp experience inspire you to join the SF Shakes Board of Directors?

For years I saw the value that SF Shakes brought to my own family through my daughters’ experiences, and I wanted to help the company expand and become better funded…I wanted to “expand the goodness”! There’s so much value in this program, and I would have sent my older daughters to camp earlier if I’d known about it earlier. So I got on this Board to help spread the word.

Thank you, Cynthia, for your dedication to SF Shakes and our Bay Area Shakespeare Camps! We’re honored to have played such a huge role in the life of your family. 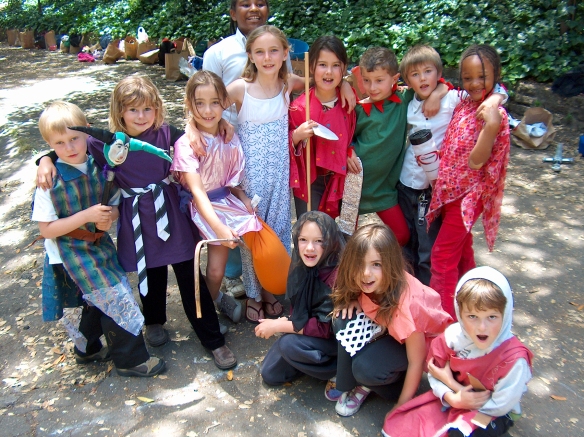 *This interview has been edited for length and clarity.